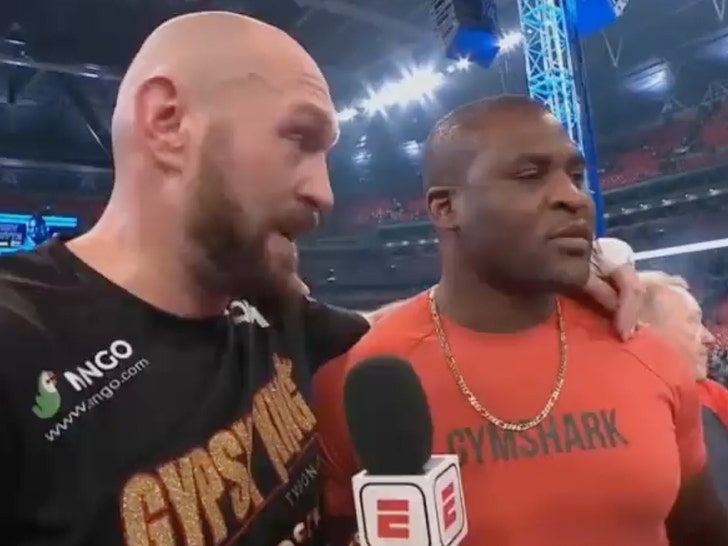 Tyson Fury just whooped Dillian Whyte in the 6th round of their WBC championship fight at Wembley Stadium on Saturday … and celebrated his victory by teasing an epic hybrid fight with UFC heavyweight champ Francis Ngannou.

Fury landed a vicious right uppercut on Whyte that sent him to the ground… and the ref called the fight.

The 33-year-old champ — who’s been teasing his retirement leading up to Saturday’s event — seemingly declared that he was content with his career and ready to hang up the gloves after the win … saying, “I think this is it. This could be the end for the Gypsy King. “

Despite retirement talk Fury brought Ngannou to the ring during his celebration… and the two teased an epic Heavyweight bout between the worst of both combat sports — with Francis suggesting a fight using MMA gloves in a boxing ring.

Francis Ngannou says that him and Tyson Fury will fight under hybrid rules.

In a boxing ring but with MMA gloves. pic.twitter.com/UmndMNgyzX

There are a couple challenges — first, Ngannou is dealing with a leg injury and will need months to get back to 100% … and second, he’s also in the midst of a contract dispute with the UFC. If he’s under contract, he will need Dana White‘s stamp of approval before taking a fight with Fury.

One thing’s for sure — Fury looked good as ever against Whyte … and if he doesn’t fight Ngannou, there’s a long list of boxing superstars who would want to step in the ring with him … including, Alexander Usyk, who has all the other heavyweight championship belts … and Anthony Joshua, a matchup boxing fans have been wanting for years.