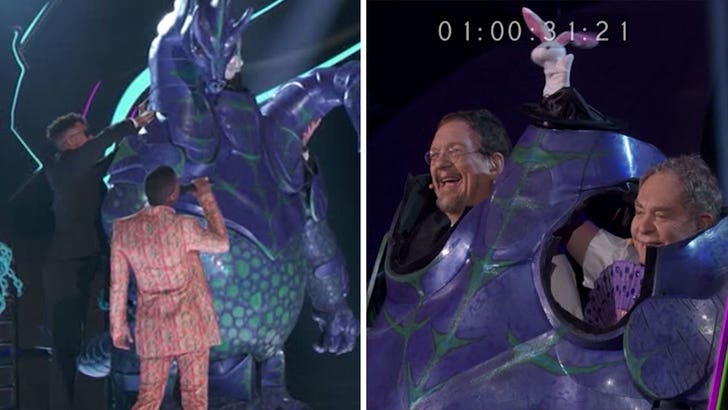 No magic tricks necessary for Penn & Teller‘s big unmasking moment on “The Masked Singer” — instead, it was a laborious process full of panic and mayhem!!!

According to our sources, stagehands had trouble removing the costume from Hydra when the legendary comedy duo was revealed as the celebs in the costume.

We were told that it was a chaotic scene backstage with people scrambling for ideas and the costume department making a last-minute decision to remove the middle head from the three-headed costume.

Our sources claim that the head was actually sawed off… and it basically destroyed the costume.

Other than hacking off the head we were told that the costume department accidentally cut a wire cutting off all electricity used for Hydra… rendering the eyeballs that were once lit up useless.

All this drama was mostly off-screen when Penn & Teller’s identities were revealed earlier in the season. Our sources claim that producers panicked when they saw Teller’s head being sliced off. They still had a lot of filming to do, including promos, reshoots and cutaway angles.

Fortunately, the wardrobe department’s really handy with superglue — we’re told they meticulously pieced together Hydra’s head, and it actually worked!!!

Make sure you check out this season on FOX of “The Masked Singer”.