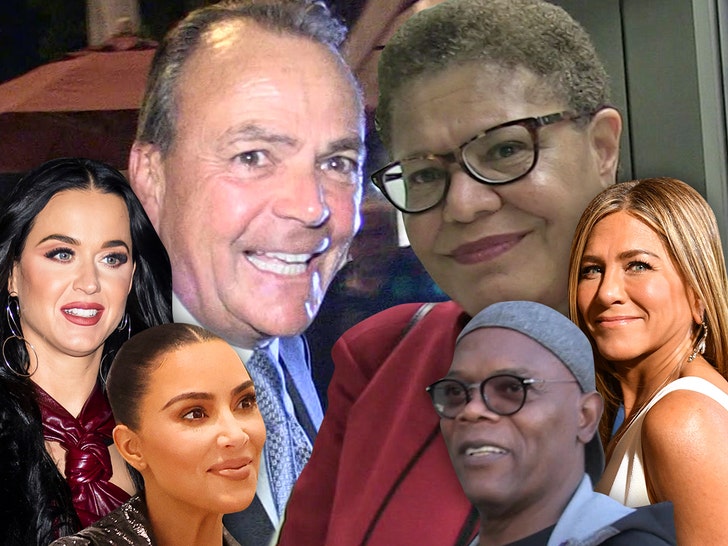 L.A.’s mayoral race is officially a 2-horse competition between Rep. Karen Bass and Rick Caruso, and Hollywood — like the rest of America — seems torn.

More celebs have shelled out traditional donations for Bass — including some high-profile names like Steven Spielberg, Jennifer Aniston and Samuel L. Jackson, but Caruso (who’s a commercial real estate titan) seems to have more vocal support on social media.

That makes sense, as billionaire Caruso’s been self-financing his campaign.

Here’s a breakdown as Tuesday’s election results continue to pour in.

Aside from the names mentioned above, Congresswoman Bass has also pulled in cash contributions from the likes of Jennifer Garner, JJ Abrams, Ken Jeong, Octavia Spencer, Sally Field and William H. Macy … all of whom pitched in $1,500 each.

Another good reason to vote for Karen Bass for Mayor of LA. Our family voted today. Californians, make sure you vote by tomorrow evening! https://t.co/CFkbo7m8TD pic.twitter.com/fDdLnxuvP2

While Caruso doesn’t have nearly as many famous financial donors in his corner, his team tells us he’s received a huge outpouring of online support … which, arguably, is equally valuable.

.@KimKardashian endorsed LA mayoral candidate @RickCarusoLA in an enthusiastic pitch to her 313 million Instagram followers, saying he would help with crime and homelessness. pic.twitter.com/D8fOtj59dM

Bass is no slouch on social media either … she’s gotten backing from Tiffany Haddish and John Legend, who openly called for Angelenos to support her at the voting booths.

It remains to be seen who might emerge victorious, but if the latest polling can be believed … neither candidate will get 50 percent of the vote in Tuesday’s primary — and that means they’ll have a runoff in November.

BTW, Caruso — who’d been a lifelong Republican until recently — is running as a Dem, as is Bass. He’s got the biz expertise, but she has years of legislative experience in D.C. and Sacramento.

Get out and vote!