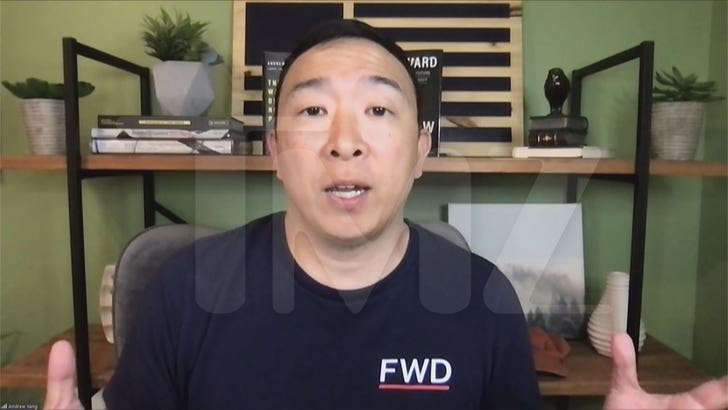 Andrew Yang is questioning the FBI raid on Donald Trump‘s Mar-a-Lago resort … he says the feds better find some compelling dirt on the former President, or it’s a horrible look.

The former Presidential and NYC Mayoral candidate joined us on “TMZ Live” Wednesday and we asked him what we makes of the FBI’s unprecedented move against Trump.

Andrew says the only way this turns out well for the FBI is if agents seized some really strong evidence against Trump, who is under investigation for allegedly removing boxes of classified documents from the White House and taking them down to Florida.

Yang says if the FBI raid turns out to be a big nothing burger, it looks like a political attack on Trump … and he thinks most Americans agree it would create some really bad optics.

TMZ broke the story … the feds waited until Trump was away from Mar-a-Lago to raid the place. In the aftermath, Trump has ripped the FBI, claiming agents ransacked Melania‘s closet while looking for the docs.

Andrew, who is leading the charge to create a new political party called the Forward Party, says the FBI raid might even help Trump become the GOP nominee in a 2024 rematch against Joe Biden, an outcome he says most Americans do NOT want.

We have merged with @samforus and @renewamerica to build a viable, durable, credible new political party. And we can’t do this without you. Join us today to learn more about who we are, what comes next, and how we can drive this movement #ForwardTogether. https://t.co/z0BoANoypb pic.twitter.com/gh6F2BPqjd

Just who those other 2024 candidates are remains to be seen, Forward Party or otherwise … but Andrew tells us why voters will be excited about the alternatives.